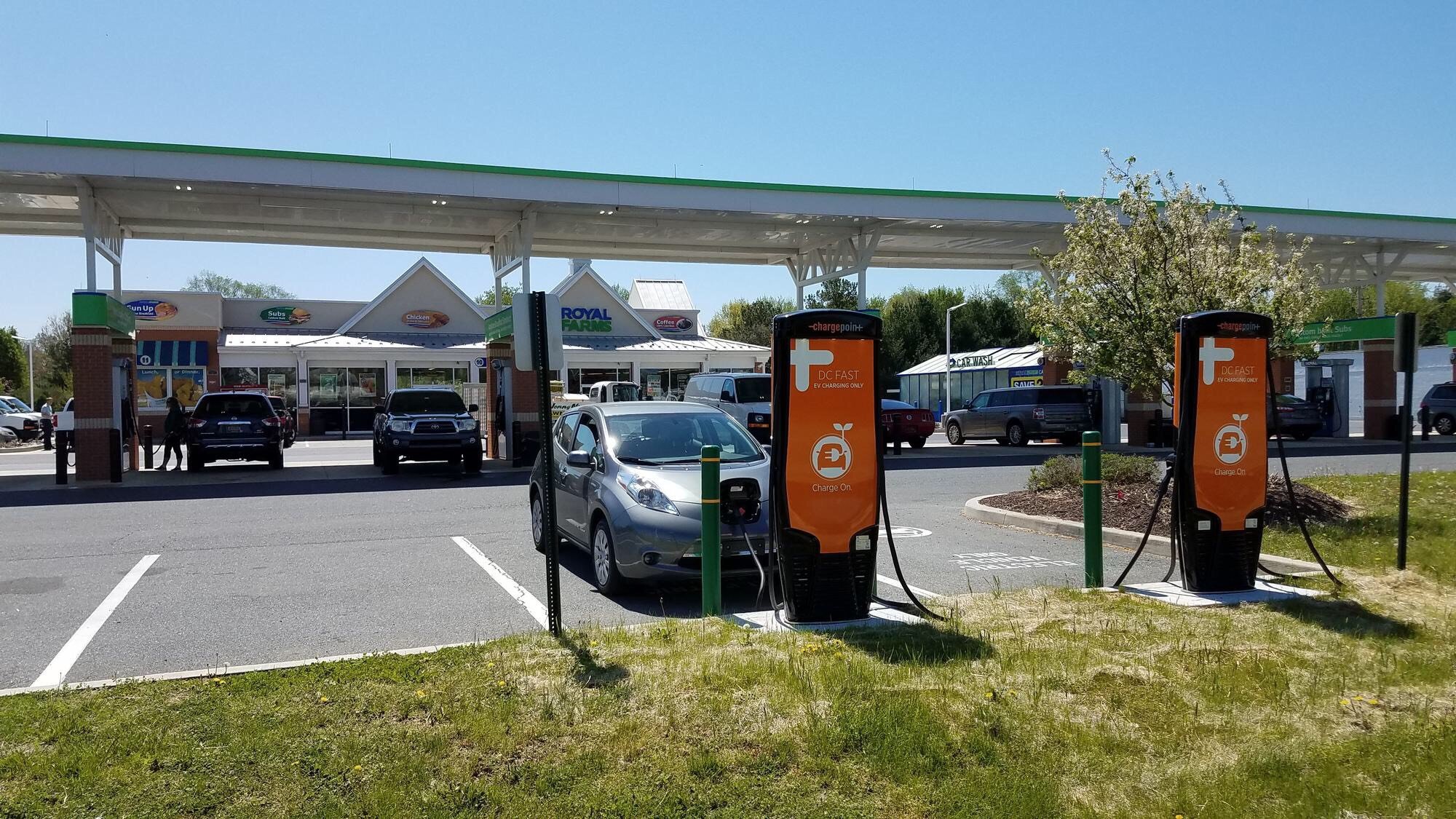 If you believe the headlines, we’ve entered the age of electric vehicles (EVs). Tesla is the hottest name in automobiles; the Chevrolet Bolt EV won MotorTrend’s 2017 car of the year award and its sales are booming. Meanwhile, General Motors, Ford, Nissan, Volvo, Porsche, Volkswagen and Audi plan to launch dozens of new EV models in the coming years.

Several factors – including state and federal tax policy and regulations, clean car standards, and car performance, among others – could speed or slow the trend. But one major hurdle can’t be overlooked: prospective EV purchasers have to feel confident that they can obtain the electricity needed to power their vehicles as easily – and potentially as quickly – as they can now fuel their conventional vehicles.

Looking at the issue from that perspective, a potential, and very practical, solution for such range anxiety becomes clear. Convenience stores — which are often practically synonymous with gas stations — exist in every community. Their business model is built on attracting customers by offering quick access to a variety of goods and services, including gasoline and diesel.

On numbers alone, the case for convenience stores is strong. According to a recent study by the Edison Electric Institute and the Institute for Electric Innovation, the number of EVs on the road in the United States will increase from 567,000 at the end of 2016 to 7 million by 2025, representing approximately 3 percent of registered vehicles. To support this deployment, approximately 4.5-5.5 million charging ports will need to be installed by 2025, up from the estimated 100,000 available today. While the majority of these installations will need to be at home and workplace locations, publicly available infrastructure will also be critical.

Speed and ease of EV recharging will be a key issue for both customers and convenience store owners. Direct current (DC) fast charging units, which typically can recharge a vehicle in 30-60 minutes, are the equipment most commonly used in pilot or demonstration projects at convenience stores today. Level 2 chargers — often used for workplace or home charging — by contrast can take anywhere from four to six hours.

The trend going forward is for-ever faster charging equipment that allows quick battery top-ups. The next generation of DC fast chargers in development could allow refueling in as little as 5-10 minutes — a far more lucrative prospect for convenience stores that rely on quick customer turnover to maximize sales.

The convenience store industry is well aware of the potential for EV charging – especially given projections of declining gasoline consumption by cars and light trucks in the coming years and the need to cater to a new set of potential customers that don’t require conventional fuel. But so far, we’re seeing more talk than action – and where there’s action, it’s limited.

In the United Kingdom, Shell is currently installing DC fast chargers at 10 locations, and company officials forecast that 20 percent of their stations’ profits from selling fuel eventually will come from non-petroleum sources. Canadian convenience-store giant Alimentation Couche-Tard, which owns the Circle K and On the Run brands in the United States, plans to experiment with vehicle chargers in Europe. The company’s efforts may be especially focused on Norway, where government subsidies and infrastructure — such as highway lanes devoted to electric cars — are encouraging EV adoption.

In the U.S., locally-owned chains, such as the Spinx Company based in South Carolina, have long supported alternative transportation fuels, and appear to be moving in the same direction with electric vehicles. In 2016, Spinx installed seven DC fast chargers in partnership with Nissan’s “No Charge to Charge” program. Others, such as Royal Farms, based in the mid-Atlantic region, have taken advantage of government funds to install at least 15 of their 21 DC fast chargers, in partnership with an equipment manufacturer, ChargePoint, and local electric utilities.

Slow action in the U.S.

These examples are exceptions to the rule. The vast majority of U.S. convenience stores seem to be waiting for EV adoption to accelerate before making the leap. The result is a chicken-and-egg problem — balancing short-term barriers and longer-term opportunities — that could slow the growth of EVs beyond the early-adopter demographic.

On the barrier side of the equation, convenience store owners see a number of challenges:

What’s needed to overcome these barriers is a conversation between suppliers of electricity – electric utilities – and convenience store owners to lay the groundwork for pilot projects that install EV chargers in or near convenience store parking areas.

Such partnerships could work in several ways. One hypothetical option — utilities could provide capital and technical expertise to install fast chargers, with some kind of on-bill financing to help convenience store owners pay for the equipment. The offset for the convenience store owner could be the potential for increased revenue sales of food, beverages and other products to EV drivers.

As utilities shift to new business models to better capture the value of distributed energy resources — like EVs — convenience stores could provide a ready platform for optimizing benefits from EVs and EV charging equipment. In addition to direct electricity sales to EV drivers, partnerships with convenience stores could also allow for the introduction of dynamic pricing for EV charging. That is, prices could change in real time to reflect changing grid conditions and system prices – as retailers do already for gasoline prices to respond to real-time market conditions, competitors, and world events. The Case for Utility-Convenience Store Collaboration

It is also important to remember that gas stations didn’t crop up by themselves. They were created in the early 20th century by oil refiners looking to increase automobile and gasoline sales. Similarly, utilities may need to take the lead in spurring demand for EVs by investing in the charging infrastructure needed to support adoption.

Assuming that the convenience store model for EV charging becomes widely adopted, existing gas stations could be an essential part of any large-scale infrastructure deployment effort. A roll-out that will save costs and maximize positive infrastructure impact — for both sides — means electric utilities and convenience store owners should be working together now.The selling points for such collaborations include:

Who will or should own EV charging infrastructure  — and the very valuable data these machines produce — remains a point of ongoing discussion across the utility, auto, charging equipment, and tech industries. Shell recently acquired New Motion, a charging firm with 30,000 EV chargers in Europe, showing some sense of the direction of the convenience store of the future.

SEPA’s EV Working Group is exploring a range of solutions for expanding EV charging infrastructure and the many complex issues EV market growth poses. More information on the member-only working group, including how to join, is available here. Ken Doyle has over four decades experience in the energy sector. As SEPA’s Chief Operating Officer, he is responsible for Programs, Finance & Administration, Operations, Communications, Membership and Marketing.

He comes from a family of association professionals, including his father, brother, wife and daughter-in-law. He arrived at SEPA with extensive experience in all aspects of association management, from member engagement and government relations to revenue growth and staff productivity.

Ken spent 34 years as the CEO of the Society of Independent Gasoline Marketers of America (SIGMA), during which time he also formed and served as President of the The Fuel Foundation. He was a founding member and currently serves as Chairman of the Board of the National Association Executives’ Forum, a national association formed in 2000 to provide its members with retirement, deferred compensation and other insurance products.

Ken is an avid skier and boater, has five grown children and six grandchildren.  He lives in Washington, DC with his wife Laura.